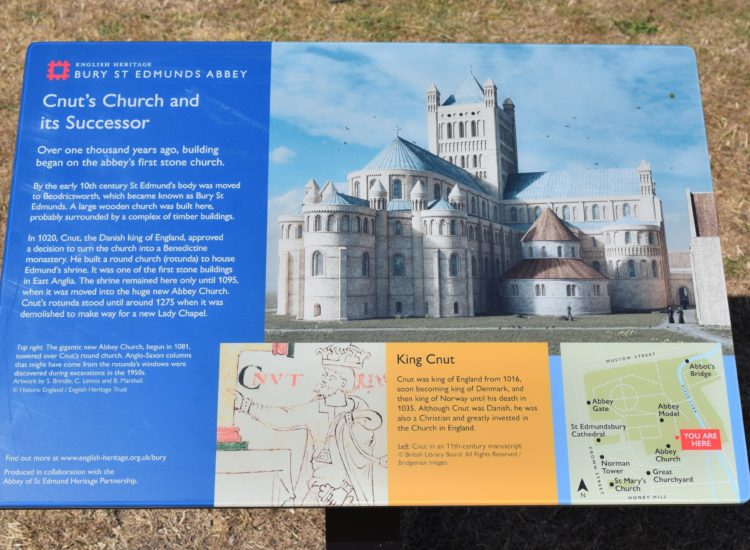 13 New Interpretation panels and a model for The Abbey

A new interpretation scheme has been unveiled at Bury St Edmunds Abbey following a year-long project digitally reconstructing the historic monument as it would have been in its heyday.

The new scheme by English Heritage, the charity that cares for the historic site, reveals its fascinating past and marks 1,000 years since the founding of the abbey. The project has been supported by the Abbey of St Edmund Heritage Partnership, with a grant from Bury St Edmunds Town Council. 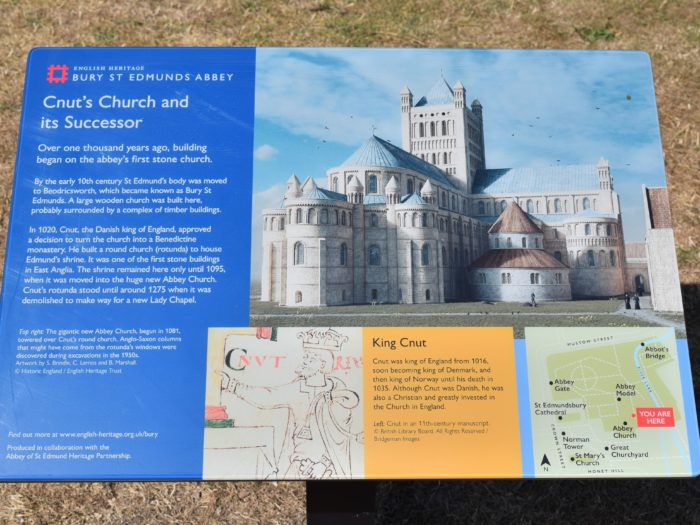 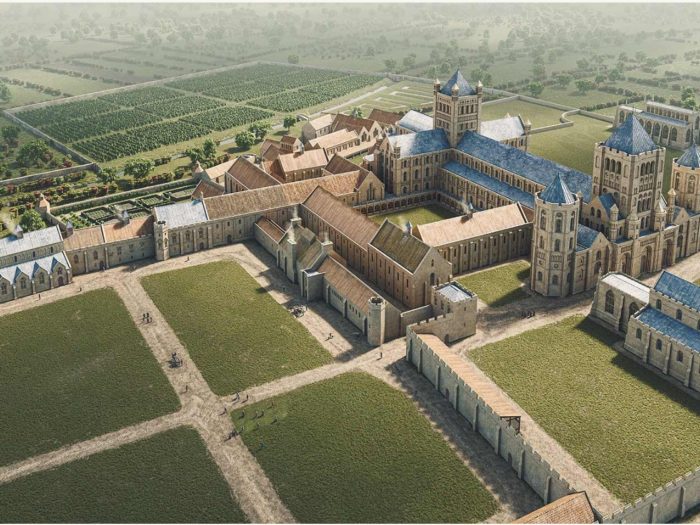 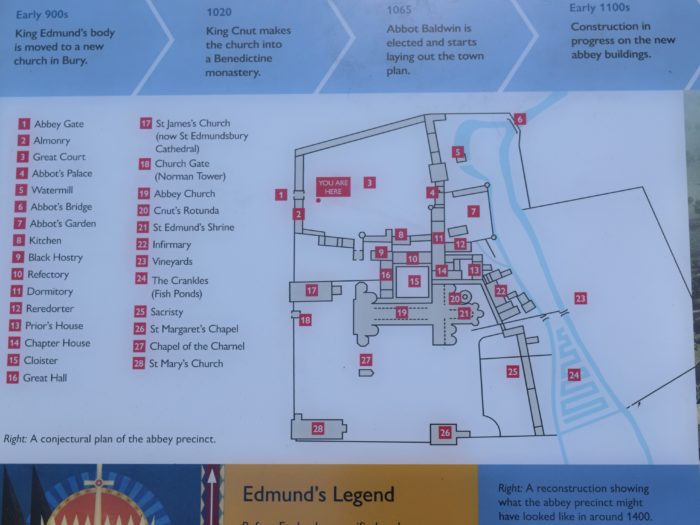 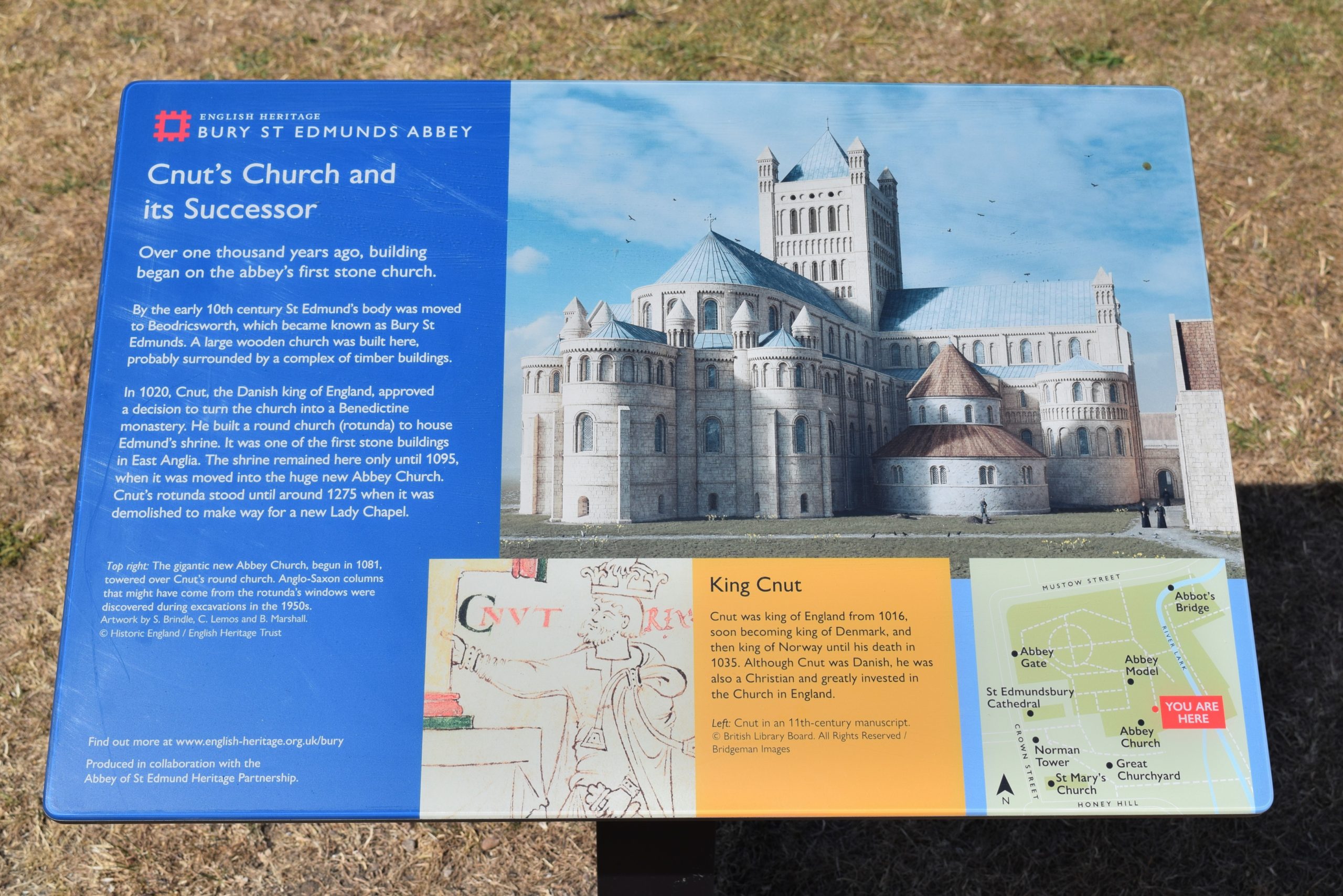 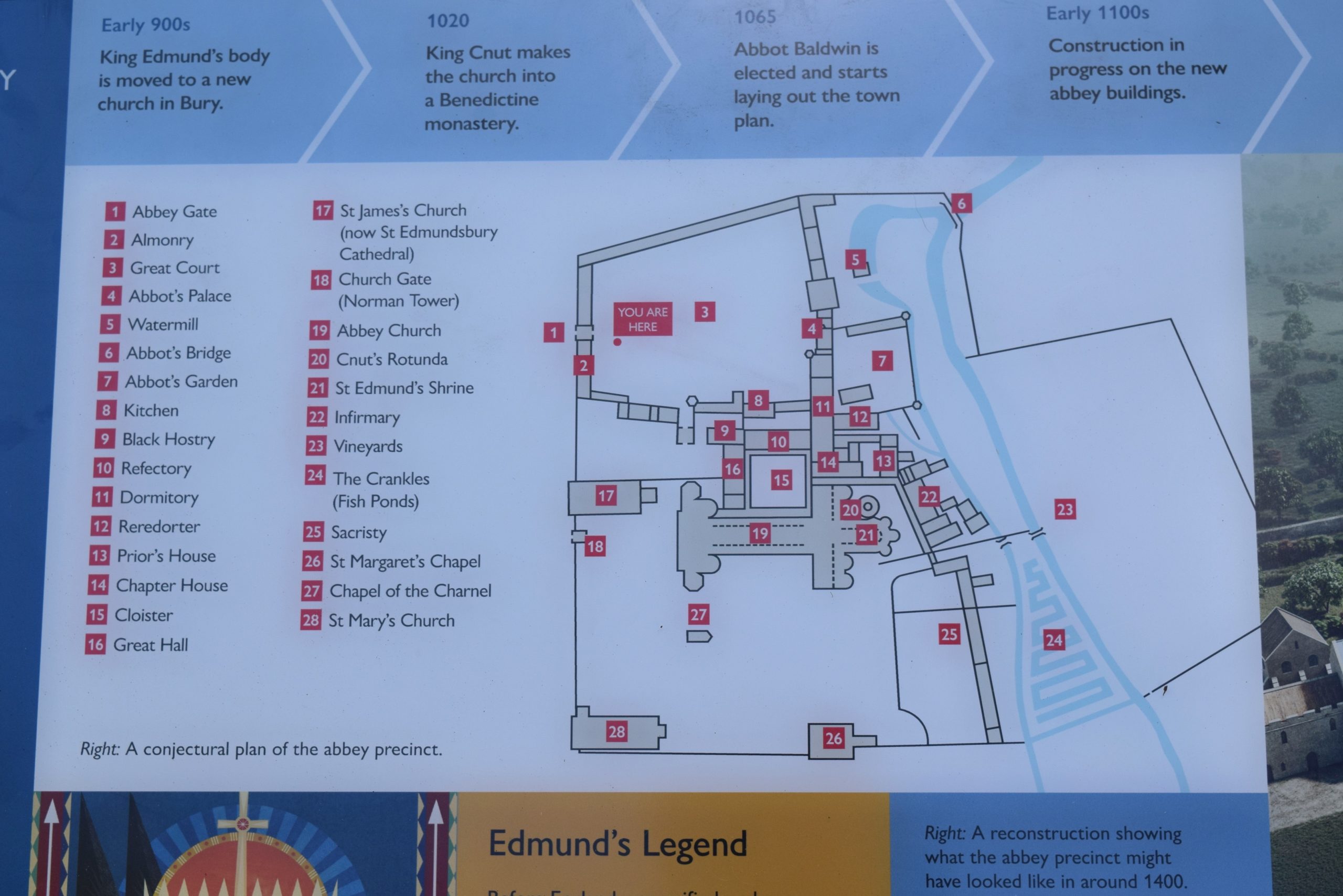 With over 1 million visitors in 2020, the Abbey Gardens and Ruins is one of the most visited free attractions outside of London*, however, while the remains of the abbey are extensive, they do little justice to what was once one of the largest and grandest monasteries in England. Named after the martyred King Edmund the abbey was a place of pilgrimage, and around 1066 was ranked fourth among English abbeys in wealth and political importance. This importance was ultimately its downfall and during the dissolution of the monasteries Henry VIII had the Abbey demolished to demonstrate his power and control.

But now thirteen new panels bring the fascinating history of the abbey to life, and highlight the story of the martyred King Edmund who was buried in the abbey church, aiding visitors’ understanding of the site’s historic importance. Striking new artwork which digitally reconstructs and re-imagines the abbey in its heyday depicts the size and grandeur of the site, helping those walking among the ruins interpret the site’s remains, and see it as it would have been at various points in the last millennium. Finally, a 3D model of the site, pre-Reformation, has been refurbished and restored by the original model-maker Nigel Purdy.

The locations of the panels and the model are shown here on a simple map.

Work began on digitally reconstructing the abbey in early 2021 with the entire site surveyed; a large collection of stonework from the abbey – which is held in English Heritage’s stores and at Moyse’s Hall Museum – was also analysed. This information, combined with meticulous research, enabled the team at English Heritage to create the initial detailed sketches of the lost abbey which were then developed into a 3D digital model of the abbey complex, with a final layer of historical detail added to create the finished artwork visitors can see today. The reconstruction is one of the largest and most complex reconstruction that English Heritage has completed of one of its sites.

The new scheme was enjoyed by visitors during Picnic in the Park on Saturday 16 July. This joint Abbey 1000 and West Suffolk Council event brought the community together to celebrate 1,000 years of the abbey.

Alex Sydney, Property Development Director English Heritage said “Bury St. Edmunds Abbey is a hugely important historical site, and of a scale and grandeur which, until now, was difficult to envisage. Now, thanks to these detailed digital reconstructions, visitors can truly understand how spectacular the abbey once was. It has been wonderful to work in partnership with the local community and local groups to deliver this project, and as one of our most popular free to enter sites, we can’t wait to welcome more visitors to reimagine the site as it stood for hundreds of years.”

Rev Canon Matthew Vernon, Chairman of the Abbey of St Edmund Heritage Partnership, said: “The positive reaction to the new interpretation panels from members of the public was obvious as soon as they had been installed. English Heritage have done a fantastic job with the new panels and the Heritage Partnership is delighted to have collaborated with our English Heritage colleagues. We hope with the new interpretation everyone can benefit from the amazing heritage of the Abbey.”

Cllr Jo Rayner, Cabinet Member for Leisure and Culture at West Suffolk Council, said: “The Abbey Gardens is a very beautiful and popular place enjoyed every year by thousands of people from our local communities and tourists visiting the area. But the gardens are just one part of a site that was once an Abbey of national and international significance. So in this year in which we celebrate 1,000 years since the Abbey of St Edmund was founded, it is great to see this project which will help widen people’s understanding of how it once looked and how various areas were once used.”

Sue Warren, Brand and Marketing Manager of Bury St Edmunds and Beyond – the town’s tourism brand, said: “This is such a fantastic addition to our most visited visitor attraction in Bury St Edmunds. It will massively enhance visitor’s experience of the ruins by showing them what the Abbey would have looked like at each of the locations within the ruins. It’s a brilliant addition to such an important site.”

For more details about the full year’s programme of events celebrating the 1,000th anniversary of the founding of the abbey, which culminates in a spectacular light show over St Edmund’s Day Weekend 17-20 November, can be viewed at www.abbeyofstedmund1000.co.uk.