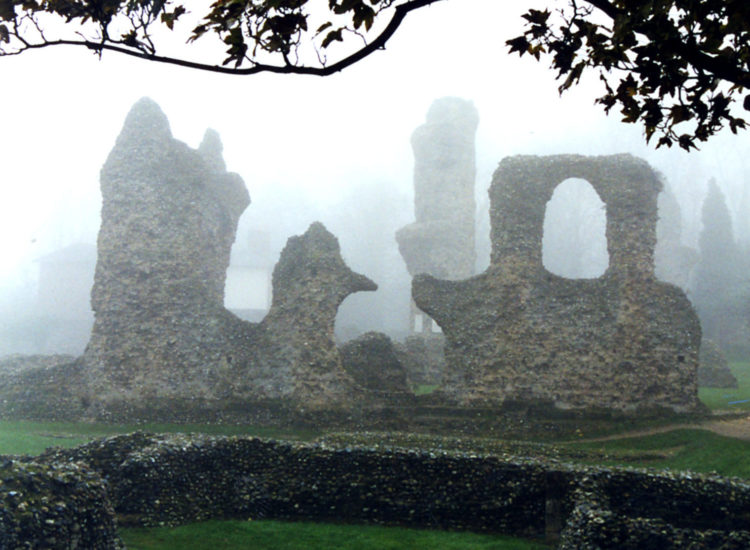 The first of two studies that will shape the future understanding and conservation of the 1000 year old Abbey in Bury St Edmunds has uncovered everything from a wolf’s head to an air raid shelter.

The Abbey of St Edmund Heritage Partnership commissioned a heritage assessment late last year with funding from Historic England and St Edmundsbury Borough Council. That study aimed for the first time to bring together all of the historical and archaeological information about the Abbey.

It has gathered together evidence that shows that several other churches had stood on the site before the Abbey. The footings of the Church of St Denis were discovered in an area by the West Front during excavation work in 1957.

The study also found evidence that much of the structure of the Abbey site had survived beyond the dissolution ordered by Henry VIII in 1539. It shows that many of the ruins lie under a deep lay of demolition rubble.  It also explains that the cloisters and domestic buildings of the monastery are to the north, unlike most Benedictine foundations, because of the direction of flow of the river.

“There are a number of sketches by artists who visited the site in the 1700s. They provide us with a considerable insight into what has survived – there were considerably more of the abbey ruins then than have survived to the present day” said Dr Richard Hoggett the heritage consultant who carried out the study.

The Abbey was founded in 1020 AD by King Cnut in tribute to St Edmund. The former King of East Anglia was slain by invading Danes in 869AD. According to legend he refused to yield to the Danes and so was shot full of arrows and beheaded, a wolf then laying guard to his head.

In the early 10th Century his remains were brought to Bury St Edmunds and with the foundation of the Abbey of St Edmund, the site became a place of national and international pilgrimage.

Such was its importance that it was the chosen for a clandestine meeting of a group of barons in 1214. They met in secret at the Abbey to swear an oath that they would force King John to accept a Charter of Liberties – the Magna Carta. That document is celebrated as playing a key role in the foundation of human rights and democracy, particularly the American Bill of Rights written in 1791 and the Universal Declaration of Human Rights in 1948 – just after World War Two.

During the war, however, the Abbey site – by then a public park – was considered as a site for air raid shelters. It is believed that the only shelter actually built was where the public conveniences now stand.

Over the centuries the legend of St Edmund has fascinated imaginations. There was great excitement in 1848 when a collection of wolf skulls was uncovered close to the Norman Tower. The bones were sent to Richard Owen at the National History Museum – the same man who was busy collating the find of much larger skeletons – those of the dinosaurs. One of the skulls can be viewed today on display at Moyse’s Hall Museum.

Now, as ideas are being shaped for celebrations of the Abbey’s millennium in 2020, there has been renewed interest in St Edmund.

“We are witnessing a resurgence of interest in the abbey, the town and the king, and it is to be hoped that the site will be even more widely appreciated and enjoyed during its second millennium,” said Dr Hoggett.

The results of the heritage study will now inform a conservation plan which is due for completion in the autumn. Once completed, the heritage partnership plans to host an event at which the details of both studies will then be presented to the public.

The Reverend Canon Matthew Vernon, chairman of the partnership said: “The heritage assessment has collated the diverse history of the Abbey over the past 1000 years. All of this work – and the conservation plan that is ongoing – has been carried out with the intent of helping people better understand this fascinating site, and its importance not just in terms of its history but also its spiritual and archaeological significance.”

Cllr Robert Everitt, Cabinet Member for Families and Communities at St Edmundsbury Borough Council said: “I am delighted that the first of our two studies is complete. The conservation plan is now underway and it would be wrong for us to pre-empt the results of that study before making decisions about the area. Together, these studies will help us better understand and explain the site’s significance to local residents and our many visitors while also undertaking work to protect the Abbey of St Edmund for future generations to enjoy.”

The Abbey of St Edmund Heritage Partnership is led by St Edmundsbury Cathedral in collaboration with St Edmundsbury Borough Council and 14 other local and regional public, private and voluntary organisations.