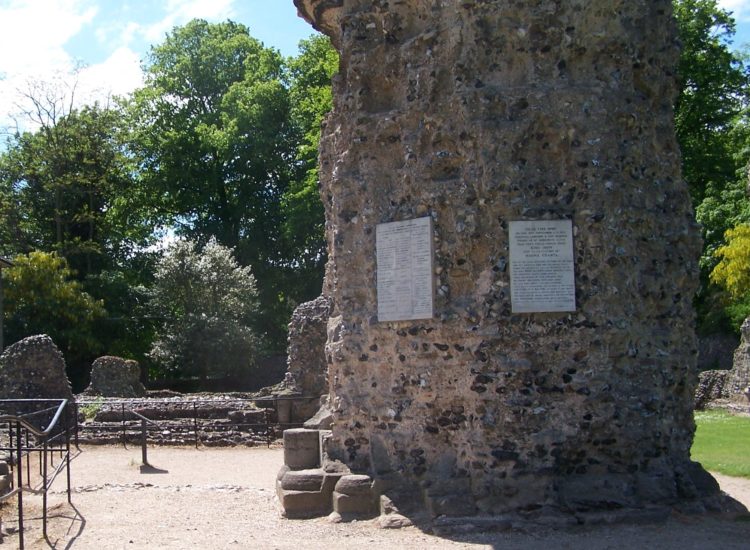 Samson reversed the disastrous financial fortunes of the Abbey by protecting its privileges. Even to the extent of denying a market at Lakenheath, it being within the Liberty of St Edmund. Samson went on to complete the West Front. Another notable build of his was St Saviours Hospital, which he endowed, the ruins of which are in Fornham Road. 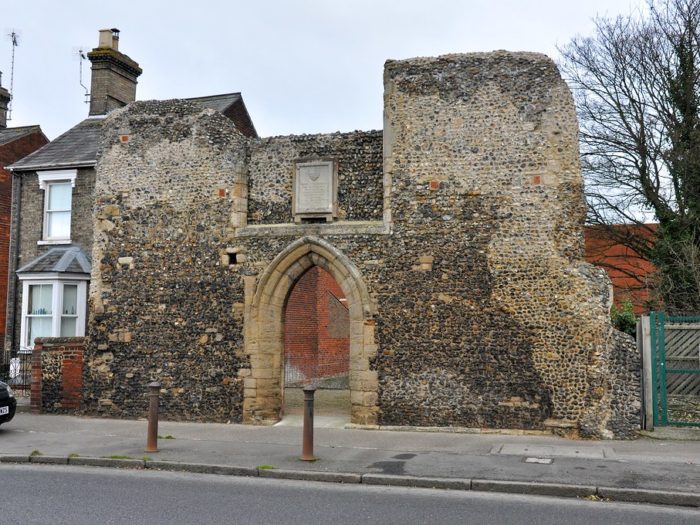 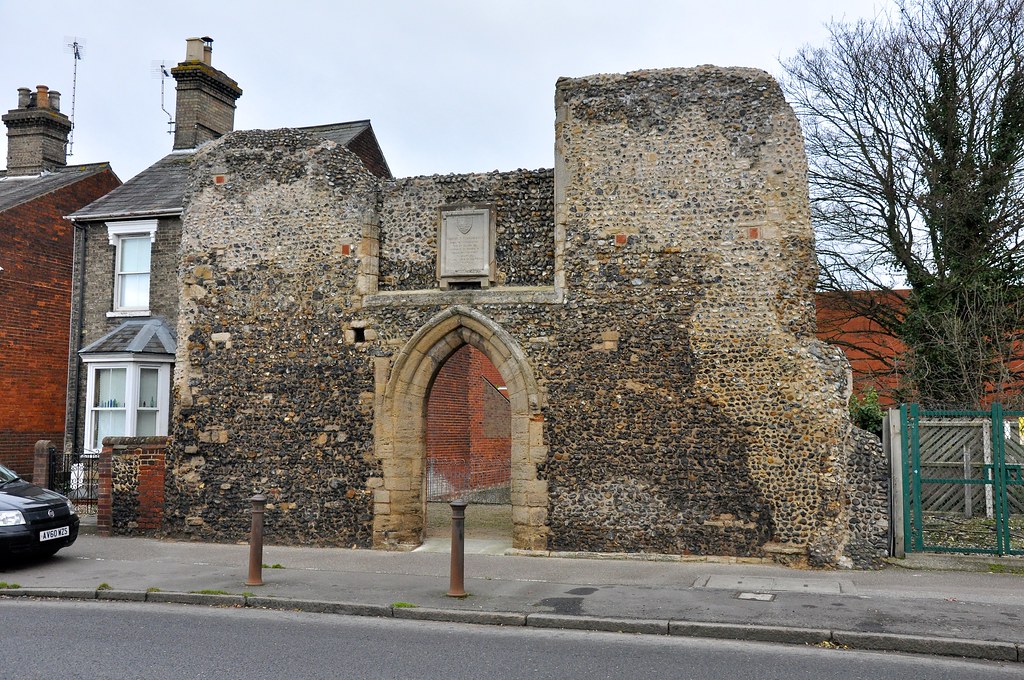 He died in 1211 nearly a year after the catastrophic fall of the central tower, it would not be rebuilt for many years as the country was under a Papal interdict from 1208 to 1214. This came about because King John refused to accept Stephen Langton, the Pope’s choice for Archbishop of Canterbury. Although burials were forbidden under the interdict Samson was buried in the Chapter House.

gh of Northwold, John expecting to give his approval of Hugh in London. Only when the Abbey’s convent appealed to the pope did John acquiesce, John also caved in to Langton being archbishop in 1207. It was this man’s pivotal role in enabling the barons of England to put pressure on John for a charter of rights, known to history as Magna Carta, the Great Charter, that would propel Bury St Edmunds into the panth

eon of England’s greatest historical events. Though dismissed for many years as inaccurate, the chronicler Roger of Wendover’s accounts of what happened at the High Altar of St Edmundsbury Abbey in 1214 have been verified as true. The meeting of 25 eminent nobles of England to compel King John to agree to their demands actually took place in October not November 20th, Edmund’s martyrdom Day. A mid-19thC tablet affixed at the Abbey’s crossing tells us who they were. John though would renege on his promise!

King John, never a great friend to the Abbey, had it proven in 1203 when on a visit he asked to borrow the jewels his mother, Queen Eleanor had given to the Abbey! Whether the collapse of the Abbey Church central tower in 1210 was a portent of the machinations to come, no sooner had the ink dried on Magna Carta sealed by King John in 1215 he would go back on his word. 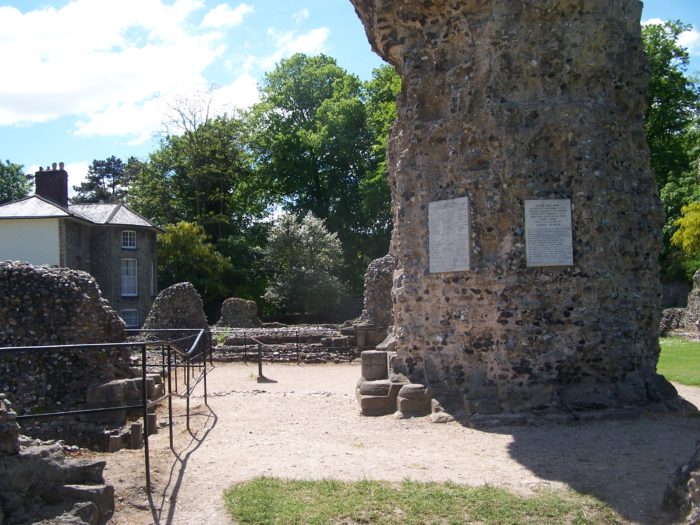 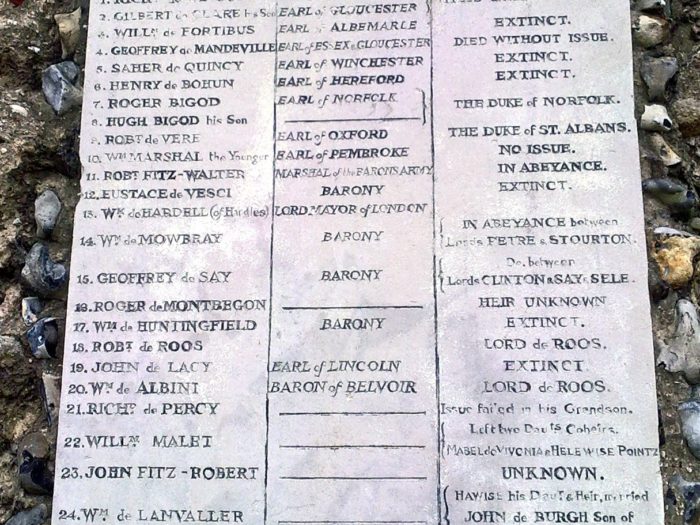 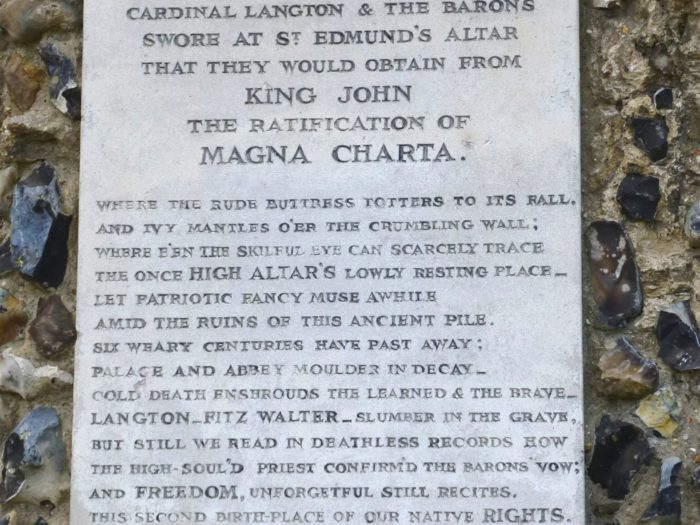 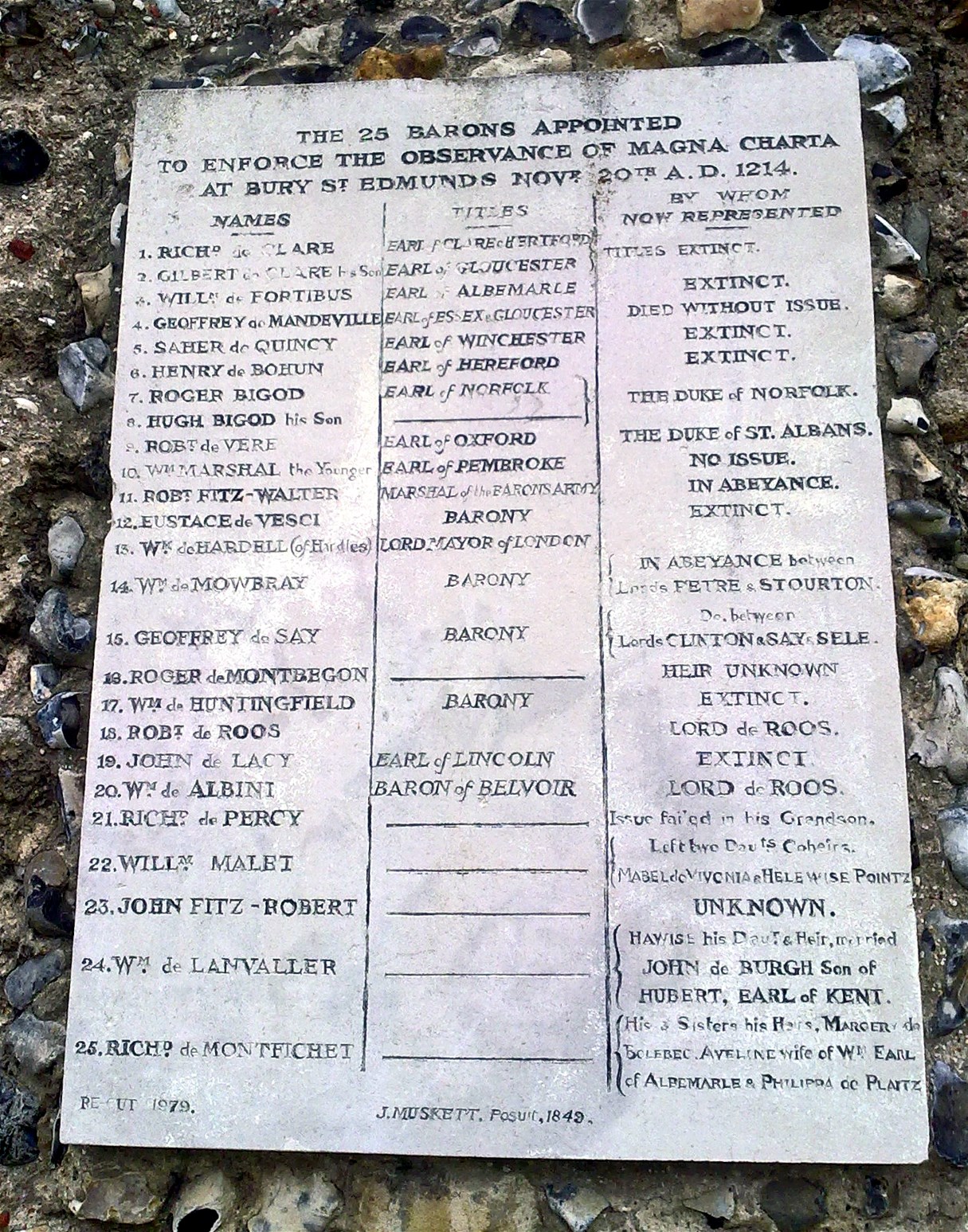 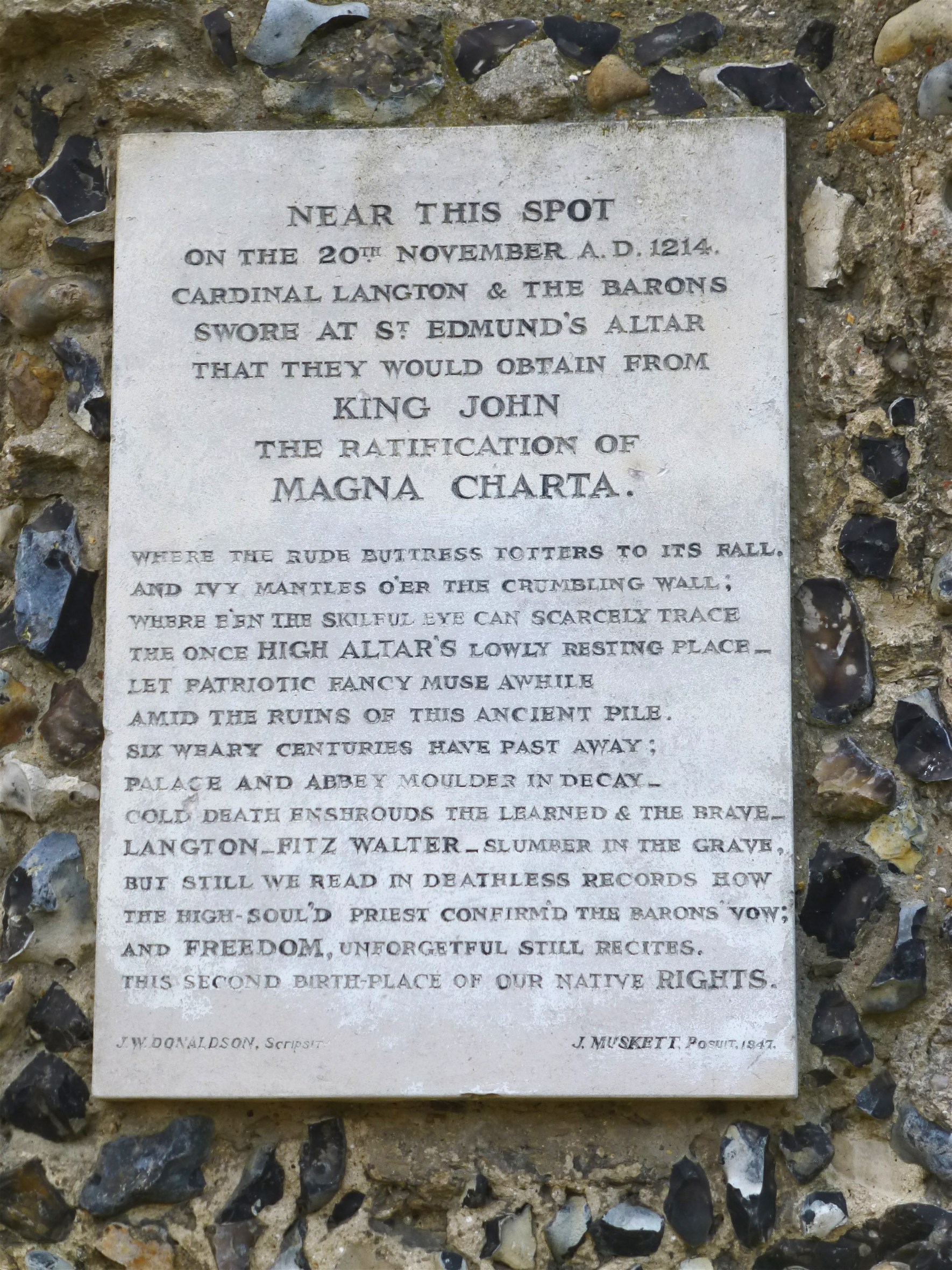 To this end the barons decided to keep their promise of waging war on him. They invited over Prince Louis the dauphin of France who with dissident barons soon entered London. However the king’s premature death in 1216 aged 49, led Louis eventually to capitulate by the treaty of Kingston between William Marshall, regent on behalf of John’s son, the future Henry III  in August 1217. According to Fr. Houghton’s book of 1970, St Edmund King and Martyr, one of Louis’s captains, Viscount Melun went to St Edmundsbury Abbey and stole Edmund’s body in the July, ending up in St Sernin, Toulouse. The purported bones of Edmund there causing controversy in the ensuing years. Think on this, back in 1217 would the monks of St Edmundsbury Abbey really have let their ‘cash-cow’, that of St Edmund, disappear into the hands of a rampaging Frenchman – definitely not! 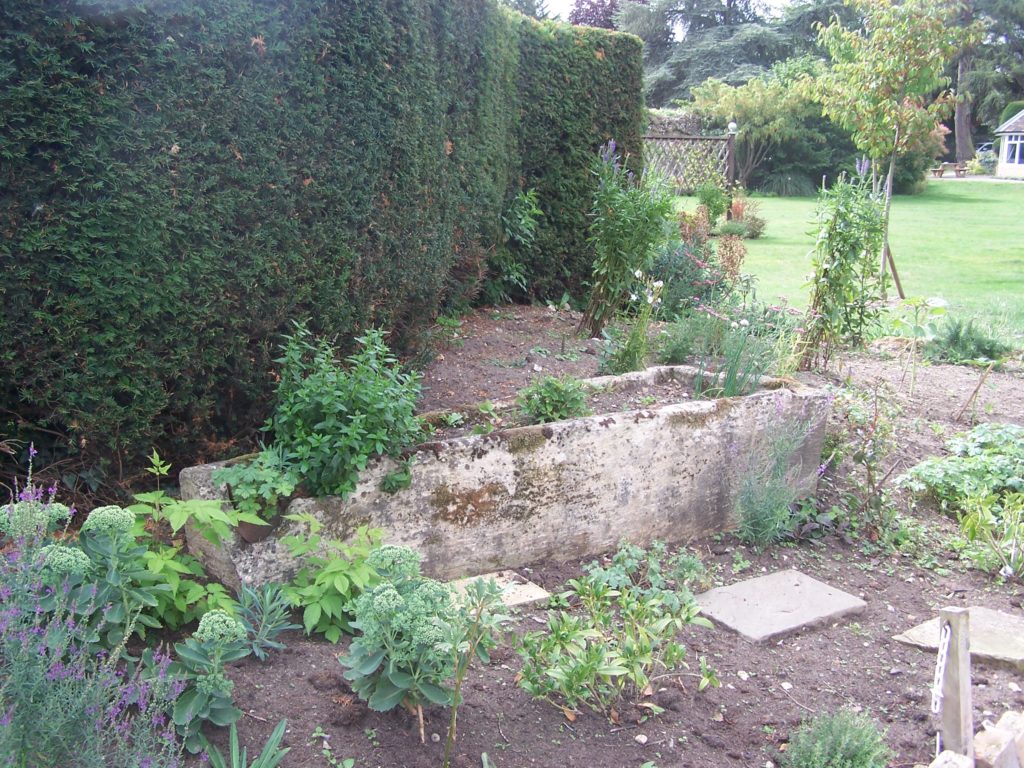 We also know the Abbey fiercely protected its rights, privileges  and borders. So it was not surprising then that Abbot Richard de Insula took umbrage to the attempts of Franciscan monks to settle in the area we know today as Friars Lane in 1233 and 1238. Twice he had the mendicant friars removed until  they settled at the Babwell Fen (todays Priory Hotel) with the help of Gilbert De Clare in 1265 who ignominiously had led a massacre of Jews in Canterbury in 1264. At the Babwell Friary they would remain until the dissolution, though in direct opposition to the rule of St Benedict.