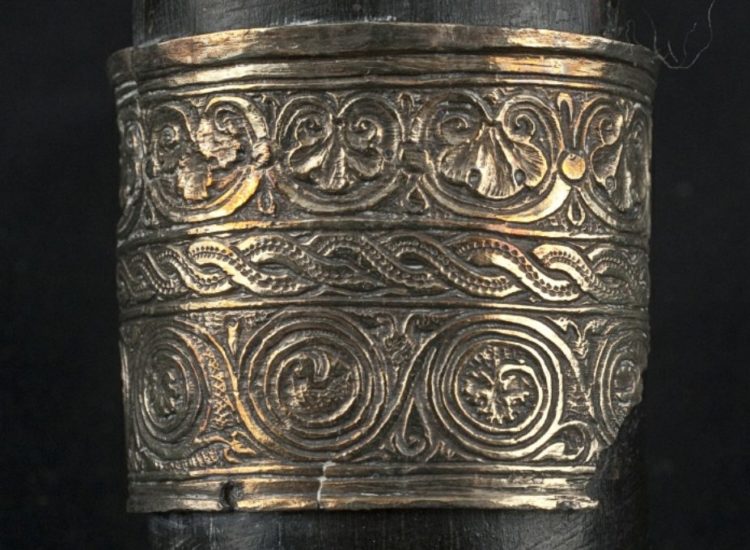 Samson and life in the Abbey

Much is known about Abbot Samson of Tottington, Norfolk thanks to an amazing account of abbey life by Joscelin de Brakelond. He entered the monastery in 1173, the year the Battle of  Fornham took place and a banner of St Edmund victoriously led the Royal Army into battle. When Samson was elected Abbot in 1182, Joscelin became his personal chaplain. His chronicle kept going throughout the abbacy of Samson, stopped eight years before Samson’s death, Jocelin outliving him.

One of the most charismatic of the abbots, it was said the red-haired Samson preached in his Norfolk dialect. At Easter in York 1190 many of the Jewish community  there chose suicide over genocide at Cliffords Tower. Coincidentally, on Palm Sunday 1190, a similar persecution occurred when Jews from Heathenmen’s Street, todays Hatter Street, fled to the abbey for sanctuary, chased there by  townspeople who accused them of crucifying a young boy, to become St Robert. Unfortunately, the abbey gate was closed shut on the Jews by Samson. He quoted “they are not St Edmunds men”, fifty-seven were massacred. A poignant memorial to this event, a stainless-steel teardrop can be found in the abbey gardens today. However, a theory later abounded that Abbot Hugh 1st, Samson’s predecessor borrowed money from the Jews, what better way to annul a debt than to rid those you owe it too! 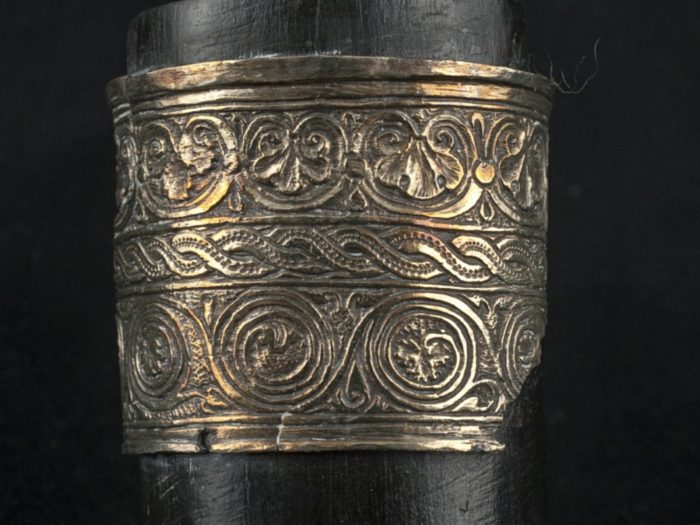 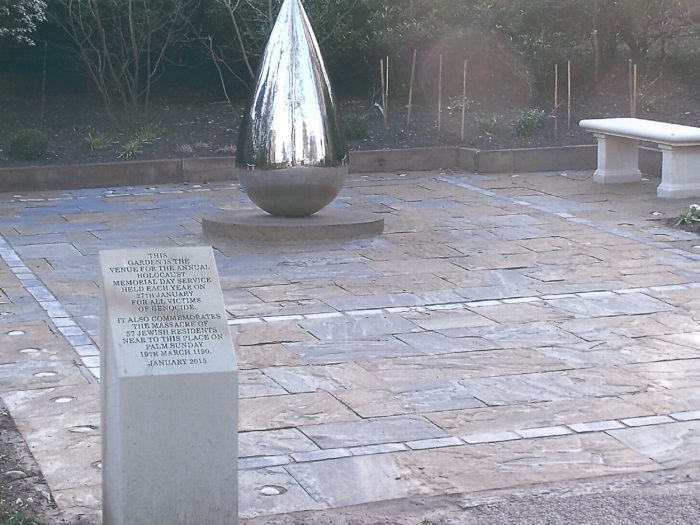 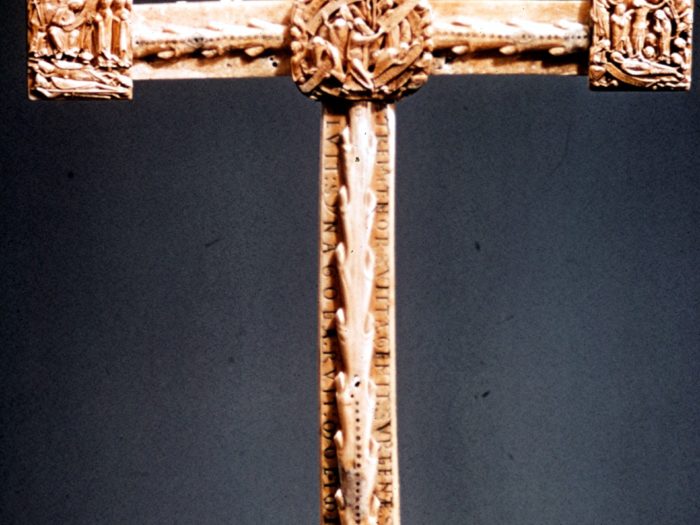 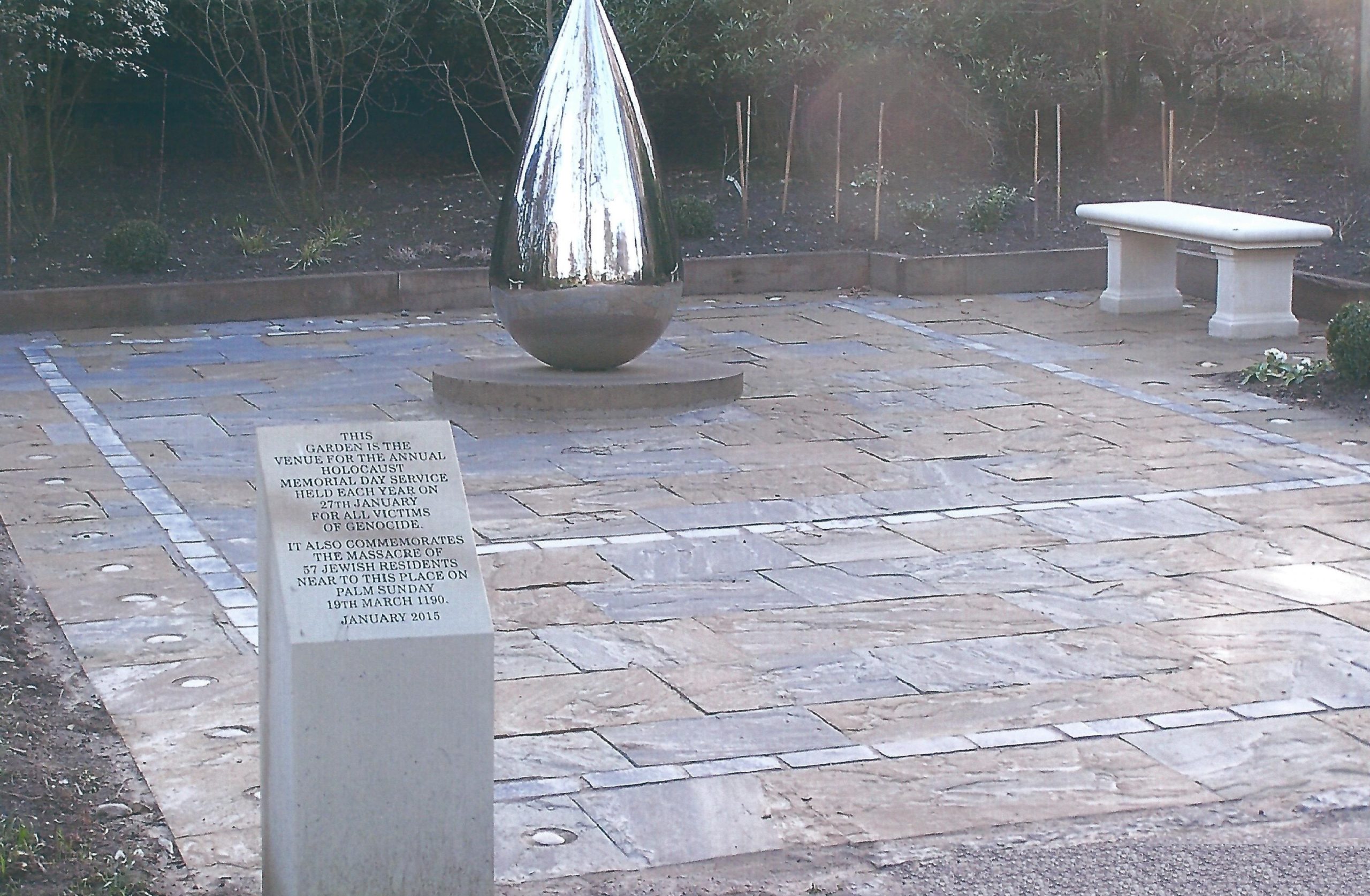 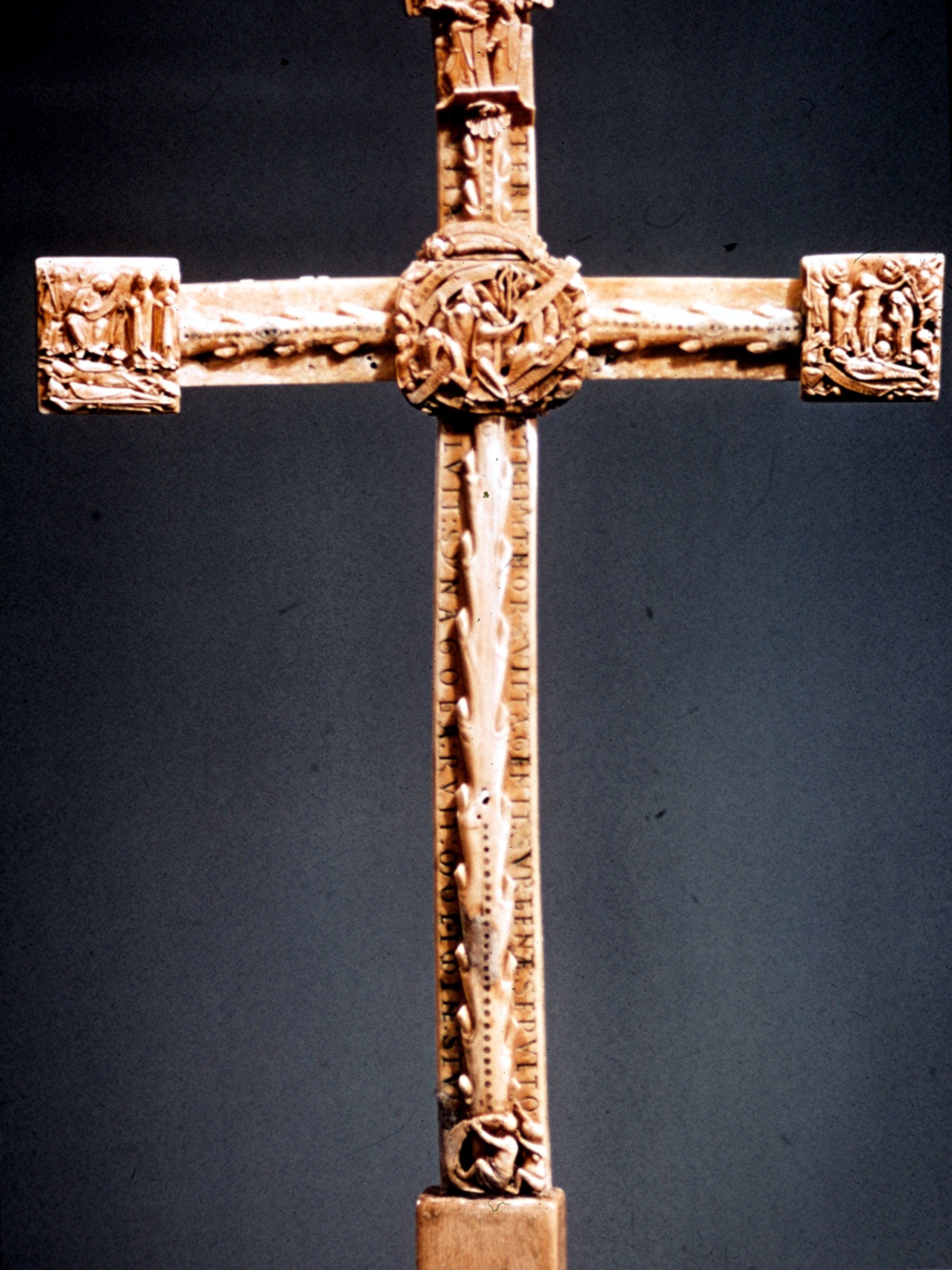 Two years later saw the capture of Richard 1st a close friend of Samson, consequently Samson took some of the ransom over to Germany where Richard was being held, this ransom may have included the wonderful Bury Cross.

As is want, there was another disastrous fire at the abbey in 1198, through negligence when a candle was knocked over, but this time St Edmunds shrine caught alight and partly damaged. In the dead of night Samson and 12 trusted monks opened Edmund’s coffin. It was found to be well covered and his body uncorrupted, the sure sign of a saint. Samson intrepidly looked upon the body and commented with respect on the largeness of Edmund’s nose! This would be the last time that Edmund’s body would be verified as being in the abbey.

By 1210 apart from a few mishaps, the magnificent Benedictine Abbey church was finished, 130 years in building. At 505 ft long and 246ft wide at the West Front and two stupendous towers, a fitting structure for the shrine of Edmund.

One quote would refer to the Abbey “as a town within a town”. Those entrusted to the welfare of the abbey were the Abbot and his obedientaries, monastic officers appointed by the Abbot. The Prior, Cellarer, Sacrist the senior posts. The Prior could be concerned with the everyday running of the abbey and listen to any of the townspeople grievances. The Sacrist looked after the infrastructure.

As the town was owned and taxed by the Abbey the Sacrist was also responsible for collecting rents and watching over any transgressions of its rights. For instance, the townspeople had to use its watermill, for which a charge levied to grind their grain, no other mill was allowed within the Banleuca. No doubt many of the residents and artisans of the town contributed in many ways in providing services though the Abbey had along the north precinct wall its own bakery, brewhouse and stables. 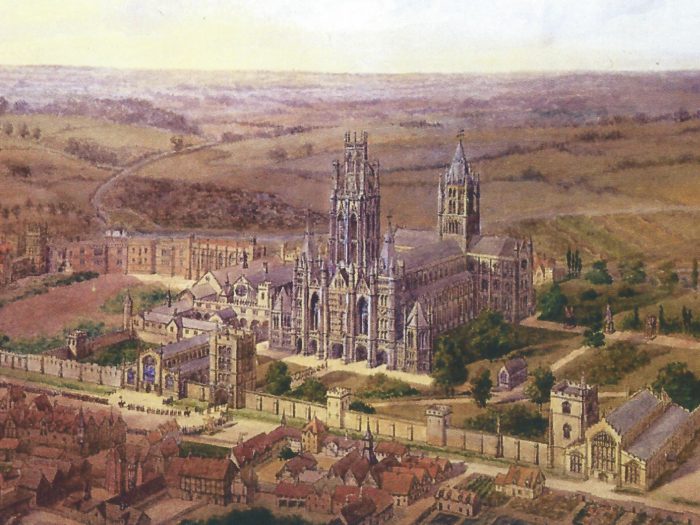 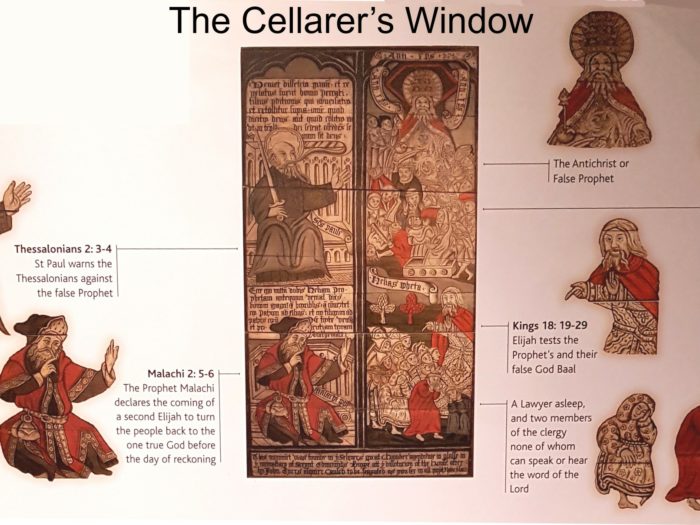 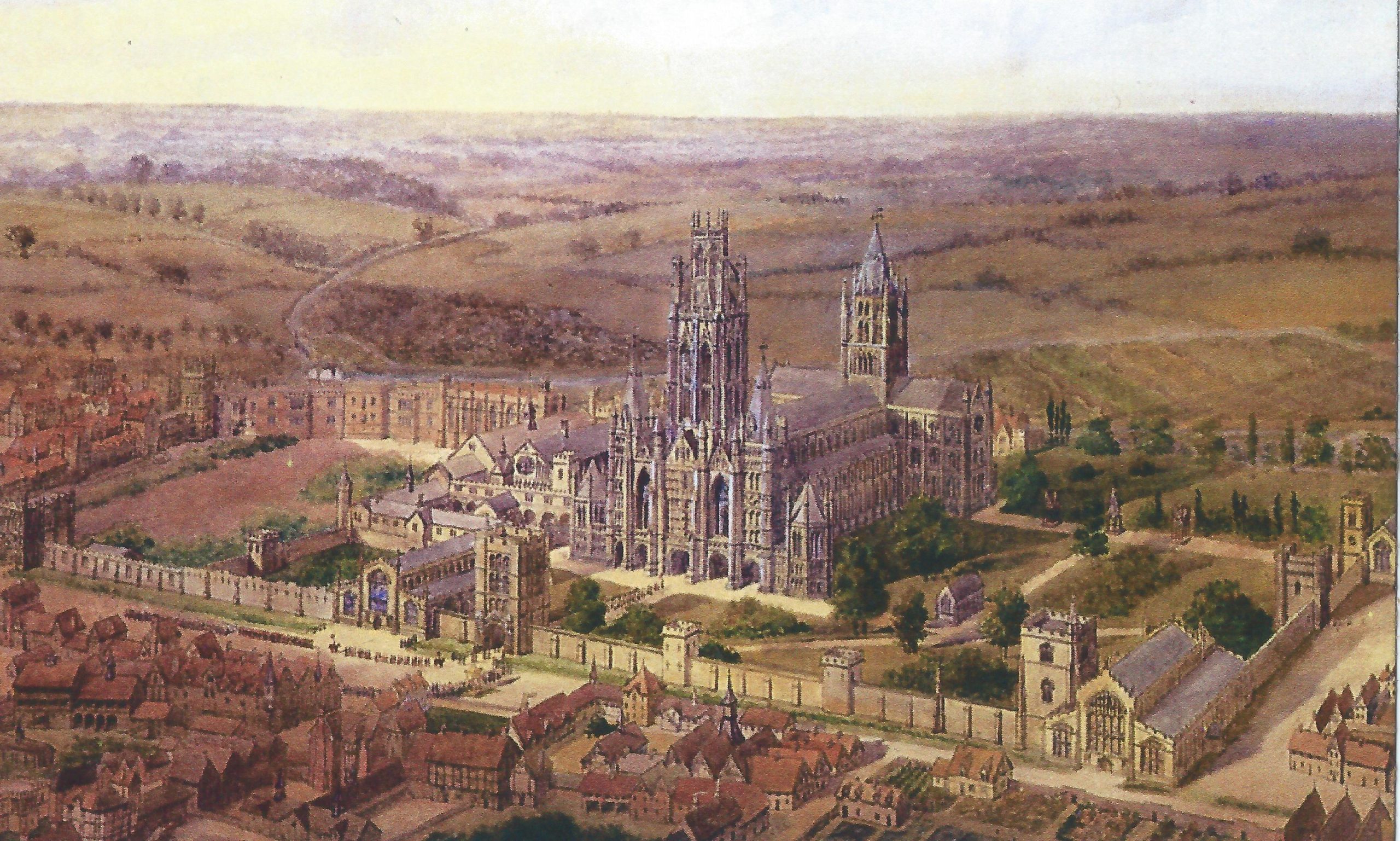 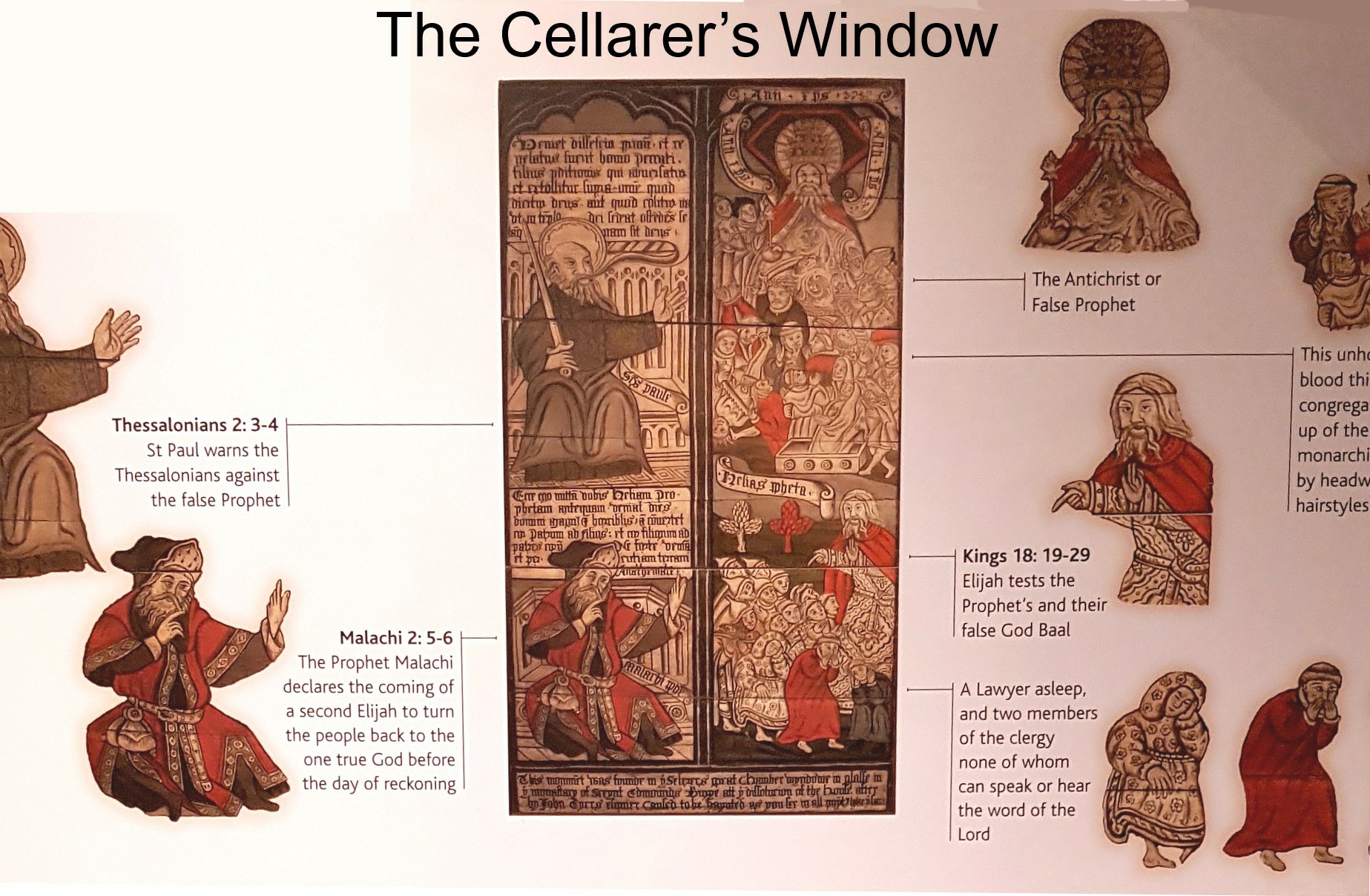 The Cellarer provisioned the monks, meat not on the menu though fish was, obtained from their fishponds, the Crankles fed by the River Lark near today’s Premier Inn. How well the monks were fed can only be judged by the role of the Pittancer, he would gather up any leftover pieces of food from the monk’s refectory and distribute amongst the poor. Hence the term not working for a pittance, a small amount.

The Abbey also catered for visitors and pilgrims via the Black Hostelry (other monks) and Court of Hospice, pilgrims big spenders with offerings for reliquaries, candles, prayers and the like.