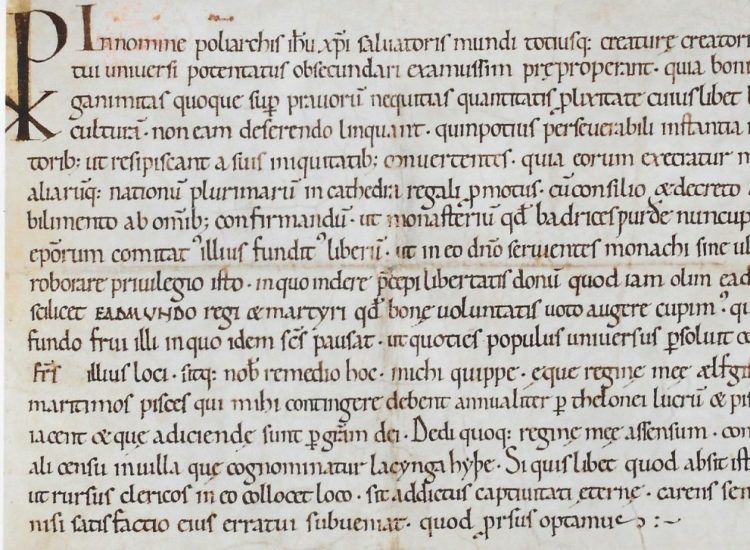 Within a few years of Edmund’s death (canonised around 930) many of the Danes converted to Christianity and it wasn’t long before Edmund was being celebrated on their own coinage.

Beodericesworth also attracted  royal patronage, King Edmund of the West Saxons gave to the monastery in 945 a charter and an area of land a mile in circumference from Edmund’s shrine  to become the Banleuca in effect ownership of the town.

The Danes were still marauding through East Anglia and in 1010  the monk Ailwin the keeper of the shrine took Edmund to London for safe keeping where many miracles were attributed to the blessed saint. He returned Edmund to his shrine after three years though greatly missed by his temporary hosts.

Though not crowned in England the king of Norway and Denmark, Sweyn Forkbeard, assumed the English throne. On hearing the news that Edmund’s abbey was exempt from taxation because of the gift of the Banleuca he threatened to despoil it. This threat had terrible consequences for Sweyn as in February 1014,  when he sat down to eat with his entourage at Gainsborough, Lincolnshire he had a vision of Edmund with a lance advancing on him. Crying out he said “ I am struck by  St Edmund “, immediately expiring.

This sent out shockwaves to the Danes. Sweyn’s son Cnut, Christian king of all England from 1016, realised that the power of this English saint had to be assuaged. He decided to oust the secular monks at the Abbey installing Benedictine monks from Benet at Hulme and Ely, Uvius the first abbot. He then turned his attention to build a stone rotunda church in 1020, consecrated in 1032 three years before his death. The copy of Cnut’s charter of 1021 held in Kings Lynn Record Office ref KL/C=2/61-62 details his bequest, though many think this document is a forgery. 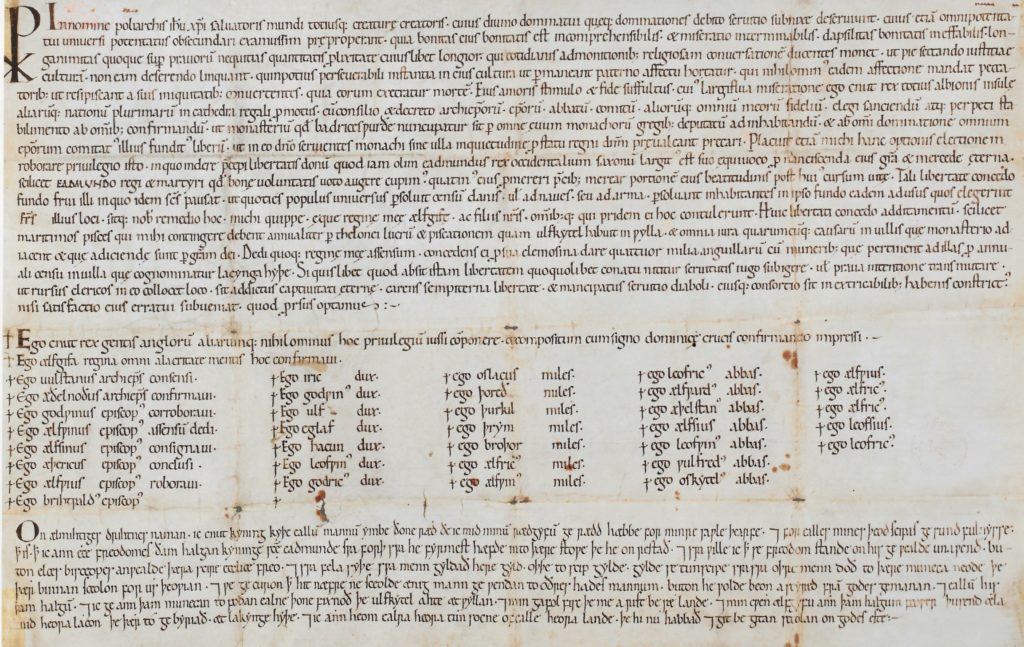 The copy of Cnut’s charter of 1021 – many think this document is a forgery.

If the charter of 1021 is a forged document it probably dates to the time of the disputes between Abbot Baldwin and Bishop Herfast of the See of East Anglia around 1073. The Bishop wanted to move his See from North Elham in Norfolk to the Abbey of St Edmundsbury, a far more prestigious place especially with an incumbent saint; Edmund now identified as being the first patron saint of England. To ensure his abbey was not going to be compromised in the future, Baldwin had travelled to Rome where the Pope granted the abbey free of episcopal control this later re-enforced by King William The Conqueror. Baldwin produced copies of Cnut’s charter proving that he had all these privileges but Herfast was unable to produce any documentation to support his case. 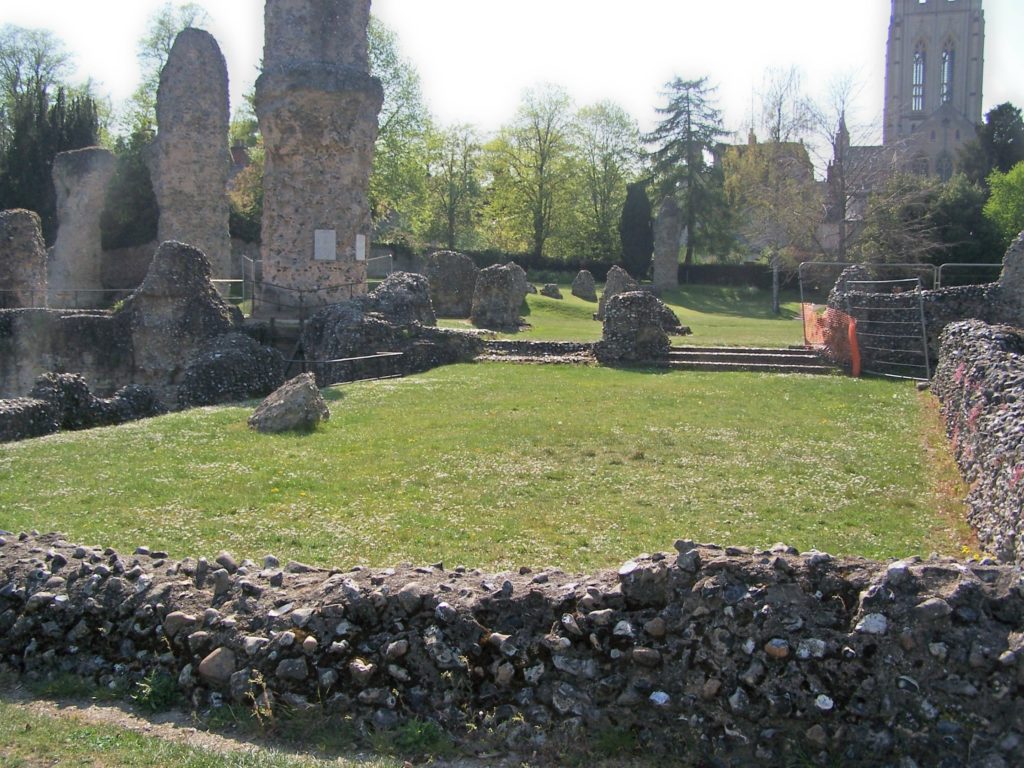 Nothing remains of the rotunda church of Cnut other than just a few tantalising  pieces of  balusters (vertical stone shafts widest in the middle, used in stairways, parapets and window spaces) found during the excavations by the Ministry of Public Buildings and Works between 1957-64. These stone fragments were uncovered 14ft down in the crypt excavation adjacent to the Lady Chapel where most likely the location of Cnut’s church is. Abbot Baldwin perhaps the foremost builder of the Abbey Church proper most probably left the rotunda church in-situ as the Lady Chapel, north of the presbytery was built later on. A postscript to the Herfast part of the story was that  whilst out riding one day he was struck by a branch and blinded. He sought help from Abbot Baldwin also the king’s physician who healed him, except for a small blemish, a reminder of his temerity in challenging the authority of Edmund. This was further to be enhanced by the stepson of Cnut, Edward the Confessor.