Edmund – when and where it all began!

Not much is known about the young Edmund. Born in 841AD the young Anglo-Saxon Edmund was crowned at Bures, Essex in 855 reputably on Christmas Day, the last king of East Anglia. Within ten years his realm was under threat by rampaging pagans, Danes, popular culture often refers to them as Vikings.

As a Christian king he rebuffed their offerings of being a ‘client king’ if he acknowledged the Danes as liege lords. A showdown with them was inevitable, the battleground, Thetford, the year 869. Facing a superior force known as ‘The Heathen Army or Force’ the outcome was inevitable, Edmund retreated, defeated.

According to the Anglo-Saxon Chronicle written many years after it stated in 870 (dates were often miscalculated) “In this year the raiding army rode across Mercia into East Anglia and took up winter quarters at Thetford. That winter King Edmund fought against them, and the Danes had the victory and killed the king and conquered all the land”.  Now this is where the historical record is murky, where was Edmund martyred? Based on an account by Abbo of Fleury the place was Haegelisdun but where was this? Not wishing to be embroiled in the many theories put forward for this location many historians now agree that Dr Stanley West a notable local and respected archaeologist and historian had it right for being near Bradfield St Clare. Suffice to say Edmund was captured and refused to renounce his Christian faith. Scourged, tied to a tree and shot full of arrows he was then decapitated, his head thrown into a thicket, the date November 20th. From this point in time the story and legend of Edmund, king and martyr takes off.

Edmund was decapitated by his Danish captors and his head thrown into a thicket; it was not uncommon for Vikings to behead their captives. What happened next has gone into folklore, as Edmund’s followers came looking for him, they heard cries of “hic, hic, hic” Latin for “here, here, here”. On looking into the thicket they found a wolf, its paws either side of Edmund’s head. Whether just looking after it or considering having ‘Tete de la Roi ‘ for his supper is  unknown. 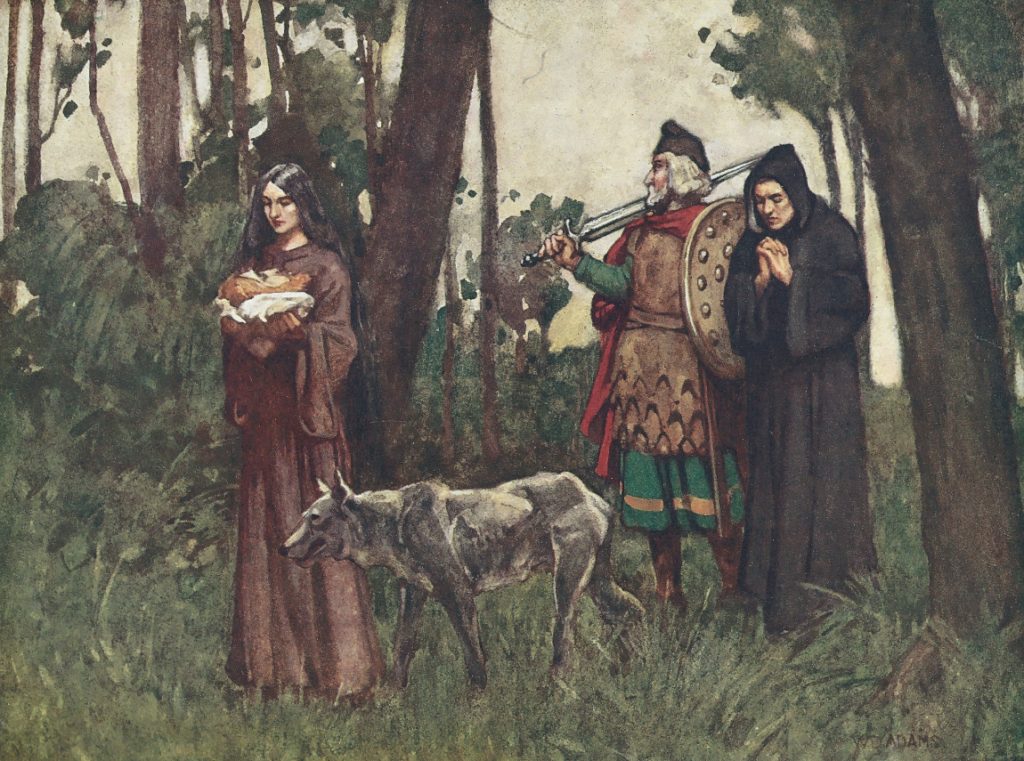 According to legend, when Edmund’s head was put to his torso, they miraculously fused together, all that showed was a thin red line where it looked like he had cut himself shaving. This, the first miracle to be associated with Edmund soon to be the first patron saint of England. Edmund was moved to a place called Sutton, a key name for those determined to prove where his martyrdom took place. In a makeshift chapel here another miracle was attributed to him when a blind  man with a boy sheltered overnight, leaving in the morning with his sight restored. Not far away was the Anglo-Saxon township of Beodericesworth, a royal vill, the future Bury St Edmunds.

In the middle of the 7thC King Sigeberht, a stepson of King Raedwald of East Anglia, had founded a monastery there with a wooden church.  In 903, Edmund was moved here, in the care of secular monks.  The body of Edmund was looked after by a devout woman called Oswin; at his shrine she washed his uncorrupted body, tenderly caring for it even to the extent of trimming his hair and paring his nails, to become holy relics years later. He was starting to attract pilgrims!