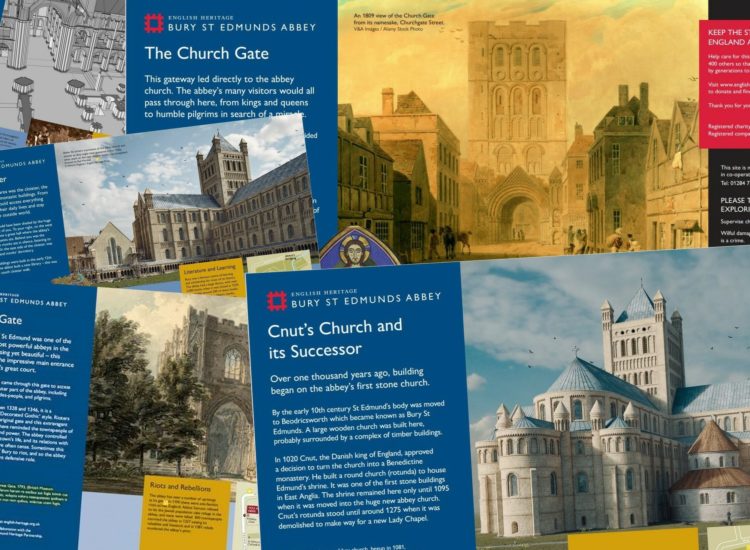 The existing metal panels date back some 30 years, only four remain and are in poor condition.  It is impossible to make visual sense of the site or understand it as the magnificent Abbey it once was. So it falls to English Heritage, as the site’s guardian, to take the lead in providing new site interpretation.

The Abbey Heritage Partnership’s Interpretation Working Group first met in January 2021 and has been working closely with Jessica Freeland (English Heritage Interpretation Manager – free sites) on this project to provide a new set of interpretation panels for the Abbey, this summer. 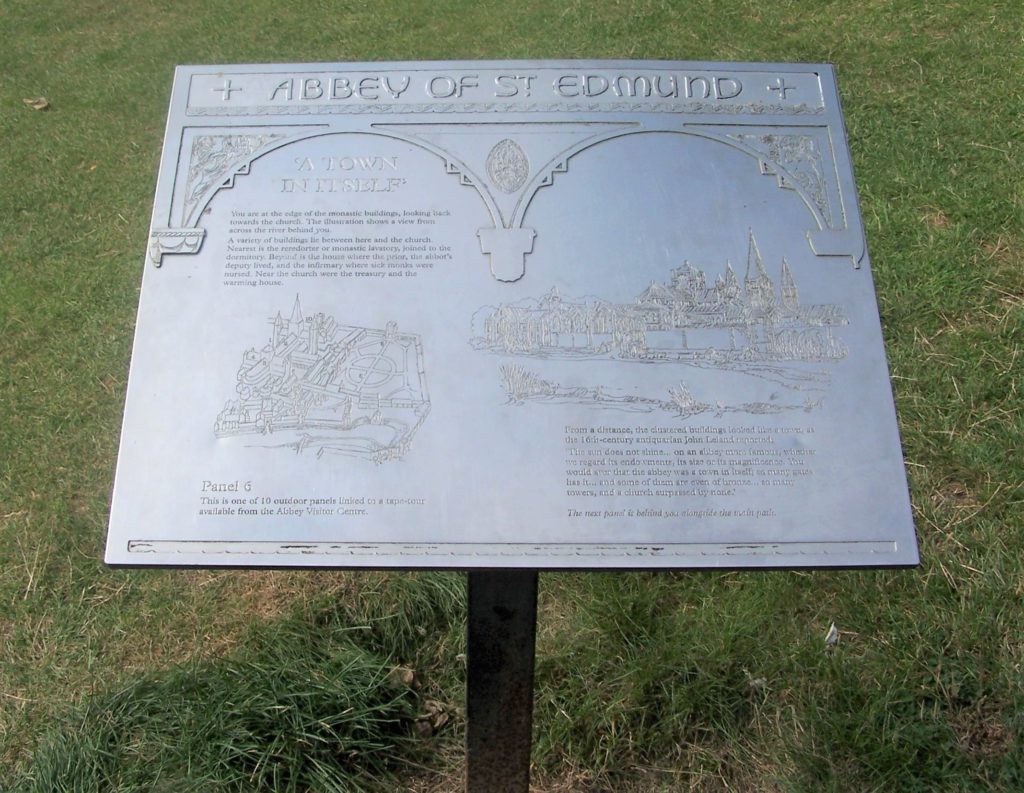 Aluminium plaque from many years ago

Scope of the Interpretation

The existing panels, which include a small tactile model, focus almost entirely on interpreting the buildings. However, they do not do this in any impressive or convincing way: the reconstructions are small-scale line drawings, indistinct and not at all accurate.
The site is large and complex, with lots of different areas. Unlike many of our monastic sites, the abbey remains lack visual coherence; the site is dominated by the modern cathedral, and by the 20C landscaping and trees, which get in the way of any real grasp of how the abbey buildings were laid out, let alone what they looked like. The interpretation will have a big job to do, just in filling this basic visual, interpretive gap. However, as the Bury Heritage Partnership’s Conservation Plan and Heritage Assessment document point out, much of the site’s historic significance resides elsewhere – in the documentary sources, its history, and place in national and local history.

A new English Heritage guidebook is planned to follow after the installation of the panels.

The Audience and Visitors

The monastic ruins at Bury are within a public park, much used by the town, with visitor numbers, estimated at over 1m a year. This apparently makes the Abbey Gardens the 5th most-visited free historic site in the UK, after the free national museums in London. This would probably make it English Heritage’s most-visited free site, and second most-visited site after Stonehenge. However, it should be pointed that many of the visitors are there, primarily, to visit a public park.
A large part of the audience is family groups with children. However, there is a high degree of awareness and sense of local ownership of the abbey ruins at Bury, and the interpretation needs to respond to this, conveying the former grandeur of the abbey and its historic significance.

Position and Sequence of the panels.

The number and location of panels have been considered at length. There are locations for 13 panels, agreed with the Abbey Heritage Interpretation Working Group.
Most visitors to the Abbey remains probably enter via the Abbey Gate from the Market Place. However, there are several other potential access points. No fixed sequence for the panels is possible, and it should be possible to read each panel in isolation.

Our knowledge of the Abbey’s layout is good: the excellent general plan of the buildings and precinct produced in 1952 by Arthur Whittingham has not been seriously challenged. This can certainly form the basis for re-drawn plans of the Abbey buildings. There are areas of the precinct which are not clearly understood, and buildings whose plan is not known in full, but in general, these are relatively minor parts of the complex, and do not present a major problem for the present project.
English Heritage have commissioned a new survey of the site, and will be producing new and accurate site graphics based on these.
Several panels will have a small vignette plan and the visitor’s location shown, ‘You are Here’.

The blue and yellow colour scheme reflects those associated with Saint Edmund. 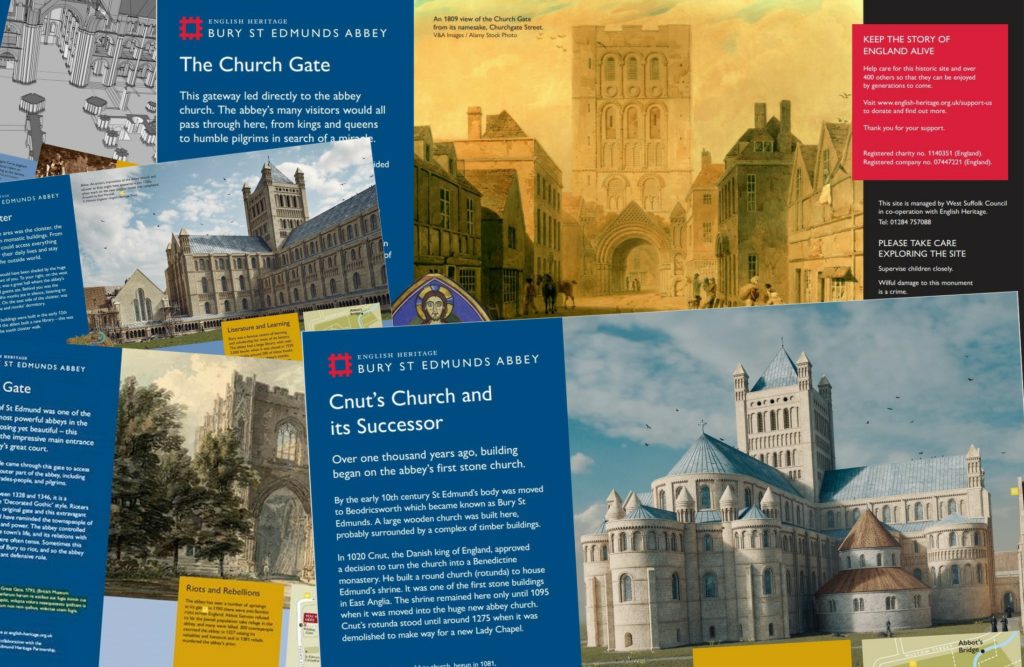 A major feature of the English Heritage project will be the new reconstruction drawings of the Abbey church, together with a detailed aerial view of the whole monastic complex. A few reconstruction drawings have been produced in the past, but they are very inaccurate, and not at all convincing-looking. Furthermore, there are no reconstructions of the abbey church interior.
For this reason, English Heritage have undertaken an archaeological reconstruction of the Abbey church, based on a new survey of the standing remains, historic images, architectural stonework in historic collections, and comparative evidence. This involves the preparation of a 3D digital of the abbey church, modelled inside and out. This first attempt to reconstruct the church has academic significance, and also has potential for further interpretation on websites.
The reconstruction of the rest of the monastic buildings will be less detailed for reasons of time, the much thinner evidence available. The 3D digital model for this could be developed further in the future, but the funds would have to be come from other sources.
English Heritage have commissioned some reconstructions from a well-known digital artist, Bob Marshall, providing detailed 3D digital frameworks.

The panels will be in landscape format,  presented as lecterns.    The text has been treated very economically.   The panels may include, as standard elements:

English Heritage podcast on the Abbey